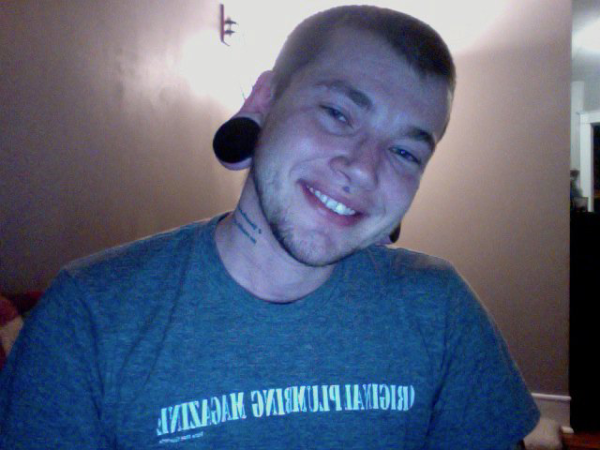 My partner Bleu has been arrested and is now in jail. Unfortunately his family and I are unable to pay his bail so I’m asking for your help. He is trans* so he has been placed in a women’s correctional facility and is being treated horribly by the staff and is constantly harrassed. I am unable to get him his medications including his testoterone while he is locked up. We need to get him out as soon as possible. The best way to do that is to donate money towards getting him a good lawyer that is familiar with trans* people and issues they face in ‘the system.’ I am taking care of his affairs until he is released inculding caring for his animals and arranging for him to have basic needs met by putting money on his jail account so he can buy socks, underwear and toiletries which are not provided for him. He has no previous record. He was only defending himself and no one was hurt. He’s a good guy, active in the LGBTQ community here in Philadelphia, a college student, loving pet owner and treats me bettter than anyone ever has. Anything anyone can give will be super helpful, money or information. Feel free to contact me with questions or concerns. 980 328 4555

*Update 11/8/12
Thanks so much to everyone who has donated. We have enough to get a lawyer to see him but still not enough to pay the full amount of legal fees. Please keep spreading the word and giving if you are able. Half of every paycheck I make is going toward this too. If you can’t give anything financially at least spread the word and pray for him in whatever spiritual way you choose. It can’t hurt to have more than one deity on his side.

*Update 11/18/12
Bleu had his first court date and since certain people important to his case didn’t show up his hearing has been postponed to 12/03/12. If they don’t show up two more times everything is thrown out and he can come home with no charges. The problem with this scenario is he has to remain in jail until these two other possible hearings happen. The lawyer that all your generous donations have paid for, filed a motion to get his bail revoked so he can come home sooner. Hopefully he’ll be home in time for Christmas but most likely will not be home for Thanksgiving. This year I’m thankful for the generosity of friends, family and compassionate strangers. Please continue to spread the word, even if you’ve boosted the signal once, maybe do it again. We are still about $1,500 short of our goal. Thanks so very much.

*Update 11/28/12
Motion was filed and heard to get him out between hearings but was denied by the judge. We got his bail reduced but it’s still too high to attempt to pay lawyer fees and bail. His next hearing is this coming Monday and hopefully people involved won’t show up again. Pray wish and hope that they don’t. Please continue to repost and do what you can to help. I’ll change the countdown when we get his next hearing date, assuming no one shows on Monday. Either way, expect an update next week either Tuesday or Wednesday. Thanks again for all your support. I just hope he’s home for Christmas. The best Christmas present of my life would be to have him safe and sound at home and in my arms.

*Update 12/05/12
Second hearing was yesterday and again no one showed. The next hearing is scheduled 12/28 so unfortunately he won’t be home for the holiday. This is their last chance to show before the case is thrown out. After that he can come home and just in time for the new year. Please continue to spread the word…again. Thanks for al your love and support. If anyone would like to send Bleu Christmas cards, I can get you the address.